CRNS’ first seminar of the year was held in a very apt venue, Recyke-a-bike’s premises in Stirling, and saw representatives from the CRNS membership come together, along with other bike projects and Zero Waste Scotland personnel, to network and engage on matters pertinent to their organisations. The hot topic for discussion was very much bike tyre recycling, namely the rubber tyres and inner tubes. 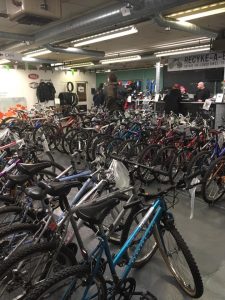 We heard from Angela Barron, CEO at Recyke-a-bike and Nina Borcard, Development Officer at Bike for Good about the scale of the problem they are encountering, which was then reinforced by delegates around the table.

Our guests speakers Russ Taylor and Richard Lawrence, Directors at Velorim Ltd had travelled up from England to attend and present at the seminar on their proposed business model and future plans for a bike tyre recycling facility in the UK. . They commenced by highlighting the fact that there are no facilities, worldwide, that recycle bicycle tyres at scale, then went on to explain their planned reprocessing methods which would result in bike tyre reuse and supporting the circular economy.

A breakout session ensued whereby in smaller groups the problem and proposed solution was discussed and debated. Overall a very stimulating and thought provoking gathering and for those that would like to access the presentations, they can be viewed by clicking on the links below: